One of my distractions for the past couple of years has been playing Series of Tubes. This is a networking puzzle gadget by Wei-Hwa Huang that can be be added to a Google personalised home page.

Series of Tubes can also be played at
http://weihwa-puzzles.appspot.com/gadgetpage?g=series_of_tubes.

] which connects to the four adjacent squares, a tee [

] which connects to three adacent squares, a straight [

] which both connect to two adacent squares.

Make all the users happy!

At the start the pieces are in random positions and one (tube or head) is coloured green.

Any piece that is rotated so that it is connected to a green piece also turns green.

The object of the game is to “Make all the users happy!” That is to rotate pieces until there is a pathway between all tubes and they all turn green.

Series of Tubes also has a number of additional options or features.

The size of the board can also be altered. My current favourite is a 25 by 25 board with wrapping on both top-bottom and left-right.

As an aid to solving the puzzle, the background of individual pieces can be turned yellow. 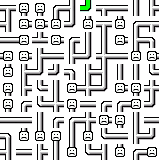 While my current favourite game is 25 by 25 with wrapping, I’ll illustrate strategies on a 10 by 10 game with wrapping.

Crosses can not be rotatated, so their orientation is fixed. 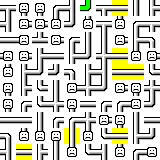 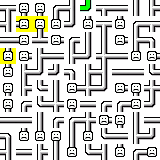 Head with heads on 3 sides

The rotation of any head that is surrounded on three sides by other heads is fixed. 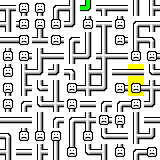 The fourth case is a combination of the second and third cases. The rotation of a head is also fixed if it is surround on three sides by heads or by straights that are fixed because they are between the head in question and another head. 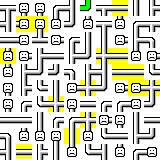 Once pieces who’s orientation is fixed purely due to their nature or location on the board has been determined, it is possible to determine the orientation of some adjacent pieces. 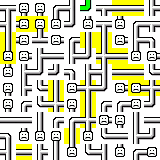 The orientation of any straight adjacent to a fixed piece can be determined. It is either: 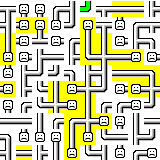 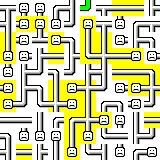 Tee with back to wall 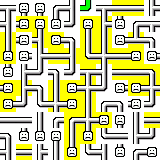 Any tee adjacent to a wall, that is a fixed piece with no opening facing the tee must face away from that fixed piece. 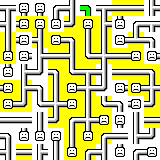 Any elbow that is in a corner between two fixed pieces can be fixed. It will either be between: 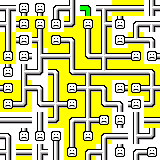 Where there are adjacent openings on fixed pieces and those openings are joined by a fixed path, then the orientation of the two pieces adjacent to those openings can be fixed. Elbows and tees will face way from the other opening, because if the faced the other opening they would join (if the other piece were an elbow or tee), or leave an un-joinable opening (if the other piece were a stright or head). This is because loops and open ends are not permitted. We alrady have strategies for heads or straights adjacent to the openings. 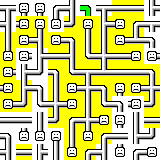 Once a fair number of pieces have been fixed, corridors of unfixed pieces one piece wide are sometimes formed. When they do, and there is an end to the corridor, then all the pieces in the corridor can be fixed. Also if there are two heads in the middle of an open corridor then they can be fixed (as they can not face each other) and every piece in both directions down the corridor from these two can be fixed. [This later case not illustrated.] 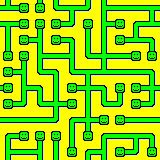 In this example the solution can be found by repeating these strategies until all pieces have been fixed.

Other strategies [which were not needed in this example], include:

Multiple heads aginst a wall
Where several unfixed heads are in a line adjacent to a wall (fixed pieces with no openings), then the heads in the middle must face away from the wall.
Heads in a corner
Where two adjacent unfixed heads are against a wall, and one of the heads is in a corner between two walls, then the one in the corner must face away from the walls and the other head.
Semi-fixed elbow and two heads
When an elbow is semi-fixed to a head and one option is to join the other end of the elbow to another head, then this position is not valid, so the elbow must point in the other direction.
Adjacent fixed pieces with matching number of closed sides
If the number of closed sides of fixed pieces adjoining a piece is equal to the number of closed sides that piece has, then the orientation of that piece can be fixed. [This strategy was suggested to me by Lars Huttar. It is the opposite of the “Adjacent fixed pieces with matching number of openings” strategy (which is a generalisation of “Fixed elbows a.”) and this strategy is a generalisation of “Fixed elbows b.”]

Some games have multiple solutions. In most cases this occurs when four or six adjacent pieces can be placed in different positions and still produce a valid solution (all users happy).

In other games a loop corridor will appear around a central island and the pieces in the corridor can face in either direction around the corridor to produce a valid solution.

Occasionally a larger number of pieces will not be fixed and there will be multiple possible solutions.