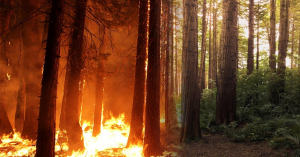 Could we just stop at 410ppm of carbon dioxide in the atmosphere?

Here is a thought experiment.

If we could wave a magic wand and stop using all fossil fuels over night what would happen?

In the short term carbon dioxide would remain at about 410ppm.

In turn this might keep global temperatures at current levels of just over 1 degree celcius above pre-industrial levels.

However we would continue for the forseable future with the changed climate we now have.

Greenland and Antartic ice sheets would continue to melt. which would lead to increasing sea levels and reduced albedo.

Permafrost would continue to melt leading to the release of more methane.

Wild fires would continue which in turn would reduce the numbers of trees available to capture carbon dioxide and also reduce albedo.

By breaching 1 degree celcius above pre-industrial levels we may already have gone too far.

Unless we stop all burning of fossil fuels and start to actively draw down carbon dioxide levels, we may already have started run away global warming.

Imagine a car tyre rolling down a hill.

Near the top of the hill it would be quite easy for one person to chase after it and stop it.

However as it rolls further down the hill and gains momentum it becomes more and more difficult to stop.

The same would be true of run away global warming.

The time to act is now.

The actions that are needed are to make the very quickest possible transition from using fossil fuels, plus actively reducing the amount of carbon dioxide in the atmosphere.

There are no carbon budgets left – they have already been spent.

This will require bigger changes across the whole of society than has ever occured before in peace-time.

Here are some actions that could be taken:

None of this will happen without leadership.

If you are a leader and can’t or won’t step up to this task, then it is time to step aside.